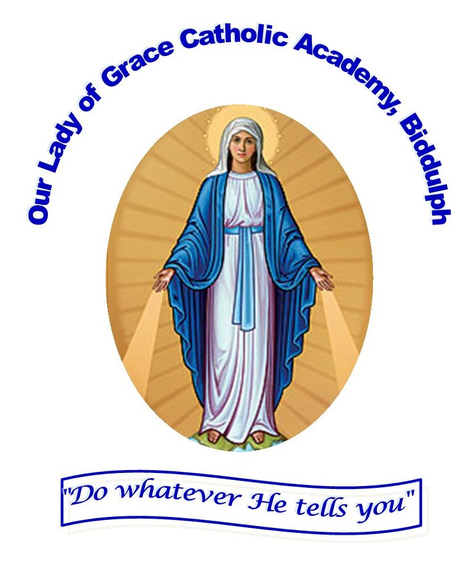 “Do whatever He tells you”

we are guided to do whatever He tells us. Many hearts,

one accord, we grow and learn together for life to build the kingdom of God.” At Our Lady of Grace, we expect our children to be:

Grateful for their own gifts, for the gifts of other people, and for the blessings of each day; and generous with their gifts, now and in the future...... by encouraging them to know and be grateful for all their gifts, developing them to the full so that they can be generous in the service of others.

Attentive to their experience and to their vocation; and discerning about the choices they make and the effect of those choices...... by promoting the practice of attentive reflection and discerning decision making; in teaching, in the examen, prayer and retreats; and through the practice and example of school leaders and staff.

Compassionate towards others, near and far, especially the less fortunate; and loving by their just actions and forgiving words.... by being compassionate and loving in the way pupils are treated, especially when a pupil is in trouble; and by opening pupil`s eyes to those who suffer poverty, injustice or violence.

Faith-filled in their beliefs and hopeful for the future..... by passing on the living and faith-filled tradition of Jesus Christ; by having persevering faith in the pupils, and by encouraging them in turn, to have faith and hope in themselves and others.

Eloquent and truthful in what they say of themselves, the relations between people, and the world..... by developing an eloquent language which pupils can use to understand and articulate their emotions, beliefs and questions, encouraged by the example of their teachers to be truthful in the way they represent themselves and speak about the world.

Learned, finding God in all things; and wise in the ways they use their learning for the common good..... by breadth and depth of the curriculum; by excellence of teaching, and the creation of opportunities to become more learned and wise.

Curious about everything; and active in their engagement with the world, changing what they can for the better..... by leading pupils to be curious about the universe and all human activity, and to take increasing responsibility for their own learning, and by providing opportunities for them to be active in the life of the school, the Church, and the wider community.

Intentional in the way they live and use the resources of the earth, guided by conscience; and prophetic in the example they set to others..... by being a school community which is intentional in it`s way of proceeding to build-up quality of life; and which is prophetic in the way it offers an alternative vision of education and the human person rooted in the Gospel. GROWING TOGETHER FOR LIFE

"By faith only do we know our position in the world, our circumstances, our rights and privileges, our fortunes, our parents, our brothers and sisters, our age, our mortality” John Henry Newman

We have an exceptionally strong tradition of working with our seven partner primary schools and St. Margaret Ward Catholic Academy. Working together for the sake of all our students, we share the same high standards of education based on the founding principles of compassion and respect.

In 2013, our family of schools formalised its successful relationships by joining together to form the Newman Catholic Collegiate.

Together with Our Lady of Grace Catholic Academy, the Newman Catholic Collegiate includes: